In artery and heart cells, if calcium levels are too high within a cell, the cell actually changes physically and will die.  Excess calcium makes for stiffness and hardening and if soft tissue hardens it is a real problem, the problem of calcification.  This calcification impedes proper functioning and heralds the advancement of heart disease.  The correct balance of calcium to magnesium will counteract this calcification.

Your first heart event could be your last

The problem with calcification is that it creeps up insidiously and increases year on year.  As the calcification burden intensifies, we probably won’t even know about it, until one day, out of the blue, a heart event occurs.  50% of the time, the first heart event in someone’s life is the death of them. 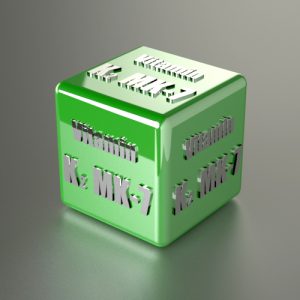 The imbalance of calcium and magnesium, which causes calcification in soft tissues, is well known. Not well known is that those who do have calcifications can reduce the outcome of atherosclerosis with vitamin K2.  Those who consume good amounts of K2 have the lowest risk of cardiovascular disease. Also, calcification of the arteries can be reduced, lowering the chance of dying from these diseases.

K1 and K2 are different

K1 and K2 are both fat soluble vitamins necessary for blood clotting, but with vitamin K2 it has other functions.  It activates osteocalcin and matrix Gla-protein (MGP). These are very important enzymes that aid calcium out of the vascular system and ushers it into the bones.  Vitamin K1 has not shown to have the same anti calcific properties as K2. It is, however, used in a controversial vaccination which is given to newborns.

K1 given to newborns 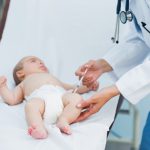 Baby’s first injections causes much debate and controversy. At the moment, parents are given the choice to skip this first shot of K1 but the other vaccination of Hep-B is often given without consent from the parent. Hep-B is completely unnecessary in my mind and can cause devastating problems for the unfortunate few. But that’s another article…

MGP and osteocalcin work together

MGP (matrix gla protein, the Gla is short for glutamic acid), extracts calcium out of the arteries and directs it to the bone.   Osteocalcin which resides in the bone, then helps keep calcium in the bone where it belongs.  These two proteins MGP and osteocalcin are so important.   They are both vitamin K2 dependent and neither can function without it.

MGP, is found in the vascular system which includes all the body’s network of blood vessels, arteries, veins and capillaries.  You can imagine how important it is, as this network carries our blood to and from the heart.  You can also imagine how many diseases would be induced if this system broke down.  Atherosclerosis is hardening of the arteries which is shown up with a coronary calcium scan. 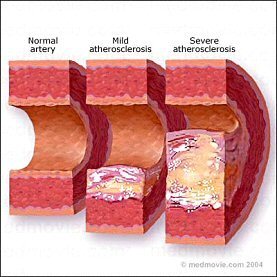 As the NIH (National Heart Lung and Blood Institute) states – “Atherosclerosis can affect any artery in the body, including arteries in the heart, brain, arms, legs, pelvis, and kidneys. As a result, different diseases may develop based on which arteries are affected.”

The K2 story is quite involved.  Don’t glaze over with boredom. Know that you could protect yourself from this problem by just taking a simple supplement of K2 MK-7.  You can also consume certain foods that will give you your daily microgram dose.  Gaining it from food is more of a problem, not least because some of the food is not to everyone’s taste! 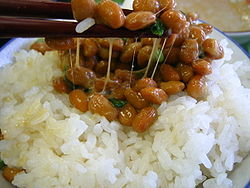 The foods that contain MK-7, are fermented foods such as a fermented soy known as natto.  Natto is produced using a specific strain of bacteria called Bacillus subtilis.  This stuff is an acquired taste to say the least and some find it obnoxious, that’s why so many go for the MK-7 supplement.

Vitamin K2 is also known as ‘menaquinone’ and K2 has a whole family of them. But we’re just interested in K2 MK-4 and  K2 MK-7.  MK-4 and MK-7 are the only K2s available as supplements and the concensus of opinion is that MK-7 is the better menaquinone to take.

What do the letters stand for? 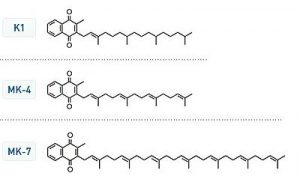 The M stands for menaquinone, the K stands for the vitamin K and the number is a description of how the molecule is made up.  As you can see from the diagram, it shows the different structures of K1, K2 MK-4 and K2 MK-7.  We can get MK-4 from green leafy veggies, some cheeses and egg yolks. MK-7 you can only obtain from fermented foods such as natto and miso.  MK-4 has a short half life which means you have to take it 3 or 4 times a day to get maximum benefit.  With the MK-7 though, the half life is much longer and a single dose per day is all that’s necessary. The amount needed by the body each day is very small, in micrograms.  Doses of as little as 45mcg per day have been suggested as being adequate. 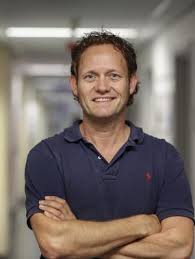 Dr. Leon Schurgers is a senior scientist at Maastricht University. He began his research on vitamin K some 20 years ago.  Currently one of the leading researchers in the world on this vitamin,  he says:

“There is a very strong correlation between inactive MGP and microcalcifications. It’s very interesting to speculate that vitamin K deficiency is causative of microcalcification, which then sets on a whole cascade of processes leading to atherosclerosis.”

This study was started in 1990 when subjects were introduced over a 3 years period (1990-1993).  The analysis included 4807 people with dietary data and no evidence or history of myocardial infarction (heart attack) at baseline.  These people were followed until January 2000.  The study used 3 different levels of menaquinone (vitamin K2). Results found that there was a direct relation to the reduction in coronary heart disease (CHD) as well as all cause mortality.  Those consuming the upper levels of K2 (45mcg) had a 50% reduction in coronary calcification. They also had a 50% reduction of all cause mortality against those consuming the lower amount of K2.

Have a look at this short video about K2 from Dr Eric Berg.

And for those taking statins

Statins stimulate atherosclerosis and heart failure: pharmacological mechanisms by Dr. Harumi Okuyama from Japan. This is an article in the  Expert Review of Clinical Pharmacology, March 2015.  It starts by saying:  In contrast to the current belief that cholesterol reduction with statins decreases atherosclerosis, we present a perspective that statins may be causative in coronary artery calcification and can function as mitochondrial toxins that impair muscle function in the heart and blood vessels through the depletion of coenzyme Q10 and ‘heme A’, and thereby ATP generation. Statins inhibit the synthesis of vitamin K2, the cofactor for matrix Gla-protein activation, which in turn protects arteries from calcification.

Dr Dennis Goodman is a cardiologist and currently a Clinical Associate Professor of Medicine at New York Medical Associates in Manhattan.  Commenting on the above article, he stated that for him, if true, it was huge that statins actually deplete vitamin K2.  Therefore, everybody on a statin (26% of over 40s in USA in 2012), will be deplete in vitamin K2.  Taking a K2 supplement is a must to counteract this statin side effect. 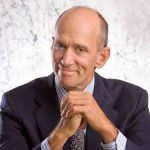 Dr Joe Mercola, talking with Dr Dennis Goodman remarked that “There are certain things that you need to take, like magnesium and vitamin K2, because they help to prevent the aging process.”  Dr Goodman replied “I think magnesium, vitamin D and vitamin K2 would be a wonderful combo.” (to counteract cardiovascular diseases).

Are you vitamin D deficient?

It is no good being replete with vitamin D3 unless you have adequate magnesium levels. Magnesium is necessary to activate the storage form of vitamin  D.  So, even if you may appear to be vitamin D deficient, upon repleting with magnesium, that apparent deficiency may disappear.  Please be careful with vitamin D.  Too much of it can have an adverse affect causing a buildup of Ca in the blood. 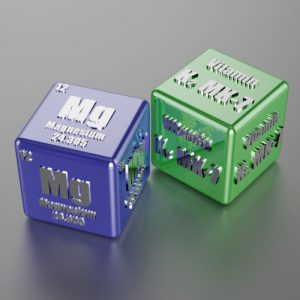 Out of all the supplements you can take to increase your health and/or protect you and your children’s health for the future, Magnesium would be my number 1 choice. I would add K2 MK-7 to help with regressing calcification.  As you can see from these 2 eminent doctors, they also put Mg at the top of their list of supplements.

Don’t take my word for it!

Don’t take my word for it, take theirs.  They are both experts in the field of integrative medicine and are knowledgeable on all fronts of allopathy and naturopathy.  Their advice is to take Mg and K2MK-7.  With vitamin D, take Mg first and see how much your D deficiency improves before taking a D3 supplement.

Of course, if you live in sunny climes, you will not need to supplement at all with D3, as long as you bare your skin to the sun regularly. Don’t use sun creams! Use hats and long sleeved cotton shirts and long shorts to protect you after you’ve had your ‘skinful’. Just 15 minutes a day in midday sun should do the job. A little less if you are very fair skinned.

Research in 2011 found vitamin D3 to be superior in raising levels in the body compared with vitamin D2. Now new research has compounded this finding with one study showing that D3: 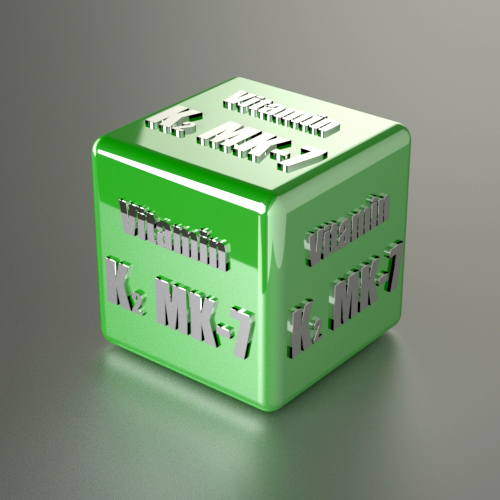