My late husband Brian was first diagnosed with Atrial Fibrillation (AF) in 1990. He was regularly getting what we called palpitations where his heart rate would soar up to 200 bpm.  The rate would also be unsteady and irregular and often last for hours.  The video below depicts what happens with this type of arrythmia.  The top heartbeat is a normal rhythm, the bottom heartbeat shows atrial fibrillation.

Irregular electrical signals disrupt the normal conduction between the SA (Sinoatrial) and AV (Atrioventricular) nodes and cause the atria to quiver.  This prevents them from effectively moving blood into the ventricles.  It can lead to stroke or other heart related complications. Courtesy AHA/ASA

The first drug he was introduced to was a beta blocker.  It did nothing for him except make him feel very ill and made no difference to his arryhythmia.  It caused impotence, a serious side effect for any man and IMHO doctors ignore and fail to consider side effects such as this when prescribing a drug.   The unfortunate and distressing results 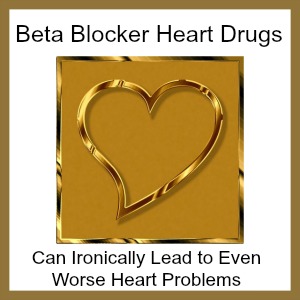 of taking some drugs seem to be pushed aside by Big Pharma as inconsequential and trivial and something patients just have to put up with.  Improving the drug to eliminate side effects would need more funding and research which means less profits.  As a side note, did you know that Big Pharma spend a vast amount on advertising in comparison to their much smaller funding for research.  As for beta blockers, the symptoms they are purported to eliminate are the same symptoms of magnesium deficiency! (There lies clue No. 1).

Off to the hospital for tests

With continual trips to the doctors because of his condition, he was sent to Hereford hospital in the UK to have tests.  As well as AF he was found to have a “floppy valve” which, although the medics said was not too serious, had to be considered when prescribing his next drug which would be flecainide.  The somewhat gruesome image here shows a mitral valve that has been calcified making the leaflets swollen and unable to close.  A floppy valve or ‘mitral valve prolapse’ is often another condition arrhythmia sufferers have and is particularly prevalent in women.  According to

wikipedia a floppy valve is:  “Mitral valve prolapse(MVP) (a.k.a. floppy mitral valve syndrome, systolic click murmur syndrome or billowing mitral leaflet) is a valvular heart disease characterized by the displacement of an abnormally thickened mitral valve leaflet into the left atrium during systole.”

The specialist who prescribed the flecainide under the name of Tambocor spoke to Brian about the possible side effects of the drug.  He said Brian had two choices, either put up with his condition or take flecainide as a permanent medication which we presumed meant taking it for life.

The specialist also said something which we both thought was strange. “Patients taking flecainide do not present in hospital with heart attack”.  As Brian could not function properly with this condition, he opted for the drug.  An attack would leave him really debilitated and he could do nothing but rest until it abated.

We did have a friend at the time who also had atrial fibrillation and had suffered the condition for a few years longer than Brian.  We asked him what he thought the doctor meant about this strange information.  He knew immediately.  He was also given this statistic when he was first put on flecainide.  He said it meant that anyone suffering a heart attack whilst on this drug, would not recover from it!  This was a bit of a shock to us. 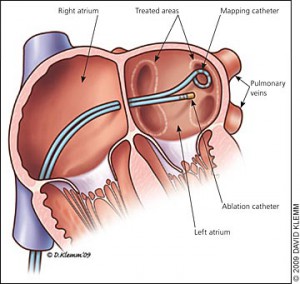 Our friend was on the maximum dose and was about to have his second treatment of ‘catheter ablation for atrial fibrillation‘.  He had the operation previously but it didn’t work so the procedure was to be repeated.  Brian did not like the sound of it as it involved causing damage by burning part of the heart to try and destroy the area which was giving the false electrical stimulus.  An  explanation of the procedure I found on the web states – “The aim of this procedure is to destroy or isolate the abnormal sources of electrical impulses that may be driving AF and to alter the tissue of the atria so that they transmit the impulses from the sinus node smoothly. This is achieved by performing ablation within the atria. Ablation means making small burns in the heart tissue, so that it is unable to conduct electrical impulses.”

I think if it had been a succes for our friend Alf, Brian would have looked into it seriously. Alf was on the maximum amount of medication and other medications hadn’t worked for him, so he did not have much alternative but to give it another go.  Some sufferers have multiple ablations.

Brian’s attacks would sometimes last for hours and on a few occasions for days.  When this happened, he had to go into hospital to have his heart medicated to bring it out of arrhythmia.  Guess what they used?  IV magnesium sulphate.  (Clue No. 2). Most times it brought him out of arrhythmia after just a few minutes of administering the mineral.  Once though, the attack carried on despite the IV medication and the doctors decided they would have to put Brian out and use defibrillators to shock his heart out of the arrhythmia.  Just as they were about to give him the anaesthetic, his heart beat dropped to 80 bpm. 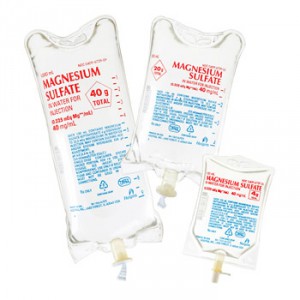 We got to know the triggers that would set off an attack and the worst one for Brian was a good cup of strong coffee which he loved.  (A stimulant, clue No. 3). We went on a few holidays mostly to Spain and he was really partial to the spanish ‘Café con leche’.  Whilst visiting Paris, on the way to Andalucia in Spain, we went to the Pompidou Centre where they make the most amazing coffee.  He just couldn’t resist a taste and proceeded to down 3 cups of the lovely stuff.  Within minutes, he went into an attack.  It lasted a few hours and I was so worried that I insisted we abandoned our trip and went back to the UK.  Once again, the magnesium sulphate brought him out of arrhythmia.  This again was a clue I should have picked up on and I regret to this day not knowing or realising the evidence stacking up for magnesium deficiency.

We moved to Spain in 1999 because he always felt better in the warmer climate but in August 2006 he died suddenly.  It was an instant death but he did have a warning sign two weeks before when he collapse onto the settee.  He came round almost immediately and said he felt his heart stop.  His blood pressure, which was usually on the high side, was very low and as I rushed him to the local clinic some 20 miles away, he seemed to recover.

Two weeks later on a hot August evening in 2006 just after dinner, Brian (who was a talented instruments maker) was working on a telescope he was making on the porch.  I was inside our little casa clearing up and went out to see how he was getting on.  He was lying on the floor with his lower legs and feet under him and an electric drill in one hand.  He must have been kneeling when he died.  It was instant which is some comfort.  Sudden cardiac arrest.  May I just say that Brian’s body would have been under a lot of stress the moment he died.  No 1 stressor – He had just eaten and much energy is moved to the stomach area to digest food which left less energy for the heart and brain.  No 2 stressor – the temperature was exceptionally hot and this puts a real burden on the body to keep it cool. No 3 stressor –  Brian was working in these hot conditions when he should have been relaxing.  No 4 stressor – Brian’s continuous condition of atrial fibrillation and magnesium deficiency would be a vicious circle, depleting the vital mineral even more until in the end it killed him.

In Part 2 of this post I want to go over the causes of arrhythmias such as AF and what can be done about it, (as if you didn’t know already)!

Please have your say if you wish to comment on this post.  All input is welcome and any questions will be answered.   Ches

Article Name
How to Prevent Atrial Fibrillation
Description
My late husband Brian was first diagnosed with Atrial Fibrillation (AF) in 1990. He was regularly getting what we called palpitations where his heart rate would soar up to 200 bpm. The rate would also be unsteady and irregular and often last for hours. The video below depicts what happens with this type of arrythmia. The top heartbeat is a normal rhythm, the bottom heartbeat shows atrial fibrillation.
Author
Ches Power
Publisher Name
http://magnesiumandhealth
Publisher Logo

16 thoughts on “How to Prevent Atrial Fibrillation”