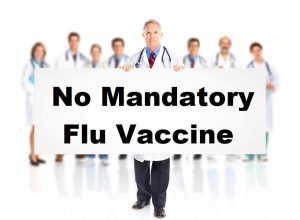 Further to my article ‘flu shot side effects’ and how the manufacturing process of the vaccine makes it ineffective. This is an update regarding employees who are being sacked for not complying with company rules about have a flu shot.

If you take a quick look at my previous article a few weeks ago, you will see that there has now been recent research which blows the lid off on how the flu vaccine is made and how this method impairs its evectiveness.  This ‘egg-based’ process of propagating the flu vaccine has been around for 70 years and is really old hat.  Of course, that does not matter to the vaccine manufacturers who are raking in vast amounts of dollars for a vaccine which, in some cases is sold with nasty toxins in it such as mercury.

Many don’t want the flu shot

For a number of years now, many health care workers have been cajoled into an annual flu shot that they didn’t want.  This is because, if they did not comply, they would be sacked.  Many did not comply complaining it infringed their freedom of choice.

One company has taken this compliance to the limit.  Essentia Health who owns hospitals and clinics in 4 states, including Minnesota, fired 69 employees for refusing to get their flu vaccinations. Despite Minnesota state law not mandating flu vaccinations, this compliance was widened to include their health care workers in Minnesota.  Many more have been given a warning by Essentia that they will lose their jobs if they do not comply and get vaccinated. 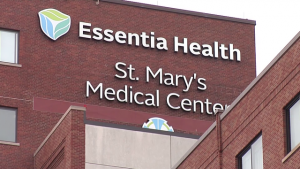 Minnesota is a non mandated state

Those working in Minnesota were very unsettled by the new requirement especially as the state they live in does not mandate flu vaccinations for health care workers.  The fact that Essentia has gone against state law could be grounds for them to be sued for unfair dismissal?

The US has no unfair dismissal law

This is a law that can be used in the UK to take a company to court if the ex employee deems they have been unfairly dismissed.  In the US however, to dismiss an employee on a legally prohibited basis ie. ‘wrongful termination’ or ‘wrongful dismissal’ is one of the most common claims, despite there being no ‘wrongful termination’ law.  Seems to me one should be put in place!

A medical exemption is the only way out of this compliance but the exemption guidelines are so narrow that 99% of those wanting to use it do not qualify.  Even if you have experienced neurological disorders, autoimmune problems or other serious reactions when previously having a vaccination, this will generally not be enough to warrant an exemption.  Essentia is obviously using these guidelines to deny medical exemptions to their employees.

Administrator sacked despite suffering side effects 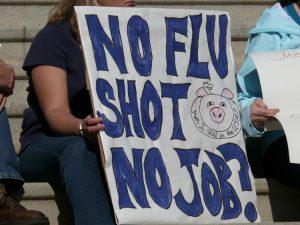 One example of this is from Scot Harvey, an administrator at the Essentia Hospital in Duluth.  When he refused a flu shot after suffering severe fatigue and other side effects from governmentally mandated vaccines during miliary service, he was refused his exemption request.  He was one of the 69 who were sacked for refusing the flu shot.

Scot Harvey, who is a registered nurse, spoke to the ‘Star Tribune’ saying that it may make it difficult for him to find work.  He did feel, however, that it was an issue of freedom of choice and said if nobody stands up to these officials, then the problem will escalate to everyone in health care having a flu shot and then everybody in any job will have to be vaccinated.

When speaking with Minnesota Public Radio Harvey said: “I don’t see how an employer can have the right to decide what I have to do to my body in order to keep a job”.  Another employee Paula Bullyan, a surgical technologist said that whether or not to receive the flu vaccine is “my choice, and they’re taking away my choice, to either receive or to take an injection into my body that I do not want”. 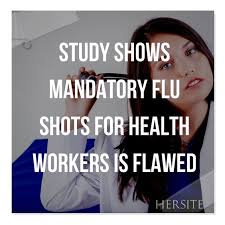 There has been research published this year that questions the scientific evidence used to press for mandatory flu shots of all those working in a hospital environment.  STAT News stated “The study… concludes that the research used to justify mandatory flu shots for health sector workers is flawed, and that the policies cannot plausibly produce the benefits that had widely been assumed”.  They added:

“Results don’t stand up to scrutiny”

“The methodology of the studies produced results that don’t stand up to scrutiny… None of the studies were conducted in hospitals; all took place in long-term care facilities.  One of the studies, from Britain, calculated that one influenza death would be averted for every eight staff members vaccinated.

But if that were correct, vaccinating the estimated 1.7 million health care workers employed in long-term care in the United States should prevent 212,500 flu deaths a year amongst residents.  There’s an obvious problem though, the paper noted.  Nowhere near that many people die from flu in the U.S. …” 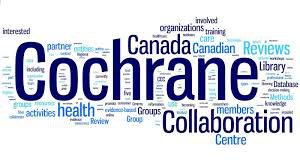 In 2010 the Cochrane Collaboration, a well respected network of researchers, published a Canadian study where they analysed scientific evidence and methods used in clinical trials.  This was following the largest flu vaccination operation in Canadian history.  They deduced that vaccination of nursing home workers had absolutely no effect on laboratory confirmed influenza cases amongst the elderly residents of those nursing homes.

No proof was found that flu shot reduced deaths 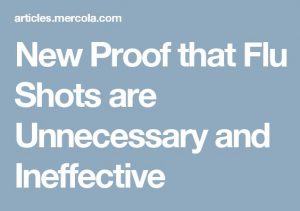 There was a study done back in 2005 which gave a warning that rather than saving lives, the flu shot could be ineffectual in preventing the flu in a significant number of elderly people.  This is the age group that has been constantly hassled to get a flu shot but according to the researchers of this study they say:  “We could not correlate increasing vaccination coverage after 1980 with declining mortality rates in any age group. Because fewer than 10% of all winter deaths were attributable to influenza in any season, we conclude that observational studies substantially overestimate vaccination benefit”.

Another high risk group is perported to be pregnant women who are continually told to get a flu shot no matter what trimester they are in.  Supposedly, influenza related complications when pregnant, can increase the risk of death to mother and child. 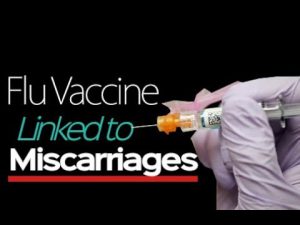 But it was found from a study published this year that pregnant women who had received the pandemic H1N1 influenza vaccine (pH1N1) and then were given another flu jab during their pregnancy, were more at risk of losing their baby through miscarriage.  This often being within 28 days of receiving the second shot.  Most miscarriages happen during the first trimester but in some cases it took place during the second trimester.

Despite research, no exemption for pregnancy

The study deduced that pregnant women who received a second pH1N1 flu shot had 8 times more risk of losing their baby than those pregnant women who did not have the vaccine.  But despite this research, those in the medical fraternity who are pregnant will most likely continue to be sacked for refusing their influenza shot. 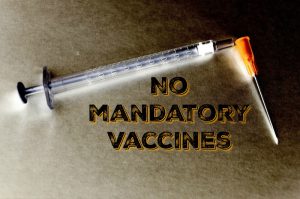 This mandatory trend is very disquieting in my mind.  If we slowly and insidiously lose our freedom of choice, a day will come when none of us will be able to lead the life we wish.  We will be shackled by the laws of the land, whatever they are and unable to follow our dreams.  These laws, which infringe on your freedom and allow an invasion of your body by unknown toxins, are a step too far.  Only you and I can decide what we take into our bodies.  If we feel it does us no good then we should have the freedom of choice to opt out of these medical procedures.

Do your own research!

For those that say, ‘it’s all for the public good’, do your research!  You will soon see it is only for the good of powerful and wealthy industries that have a single goal, to control and

to profit by it.  We are being betrayed by these large consortia dealing in pharmaceutical drugs, producing our junk foods and destroying the land and the environment with poisonous herbicides, pesticides and fertilizers.  The direction of our health is tightly regulated with the priority being for profits for all these industries, all at the expense of the health of the trusting public.