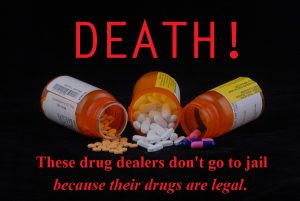 I have been reading a book by Dr Carolyn Dean, based on a review ‘Death by Medicine’ done in 2006.  As the title suggests, modern medicine is now causing more harm than good with drugs being administered willy nilly by medical practioners, prompted by the greedy efforts of big pharma.  Doctors do not have the time to go through every drug that comes onto the market and believe you me the numbers are staggering.  Their only recourse is to trust that the pharmaceutical companies that are touting drugs, have the patients’ best interests at heart.  But they must know, as do we, that Big Pharma has become unscrupulous when it comes to profits, with many suffering and dying because of it.  The medical profession has to get its head out of the sand and stand up for their patients!

This independent review of government approved medicine was done in 2006.  Professors Gary Null and Dorothy Smith with Dr. Carolyn Dean, Dr Martin Feldman and Dr Debora Rasio titled the report “Death by Medicine”.  The researchers found that America’s leading cause of death is not cancer or heart disease but conventional medicine.  Iatrogenic deaths (deaths caused by doctors and/or medical treatments) were found to be in one year, 783,936. 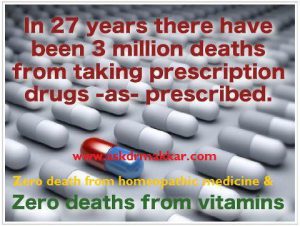 We’re talking about back in the early century.  What on earth will the figure be now, in 2017.  They did predict that over the course of a decade, these iatrogenic deaths would total around 7.8 million “more than all the casualties from all the wars fought by the US throughout its entire history”.  The researcher’s report concluded “Only 10-20% of all procedures used in medical practice have been shown to be efficacious by controlled trial.”   Further they stated “There are no mechanisms in place to limit dissemination of technologies regardless of their clinical value”.  This review concentrated on US figures but there’s no reason to suppose that the figures would greatly deviate from country to country, especially in the so called technological and medically superior western world.

How is my family’s health faring?

I decided to try and relate this problem to my own family.  Generally I would consider that they are reasonably healthy, but when I looked into the diseases and conditions my close family members have and the meds. they were on, it was quite staggering.  Also, I don’t suppose I know all their ills, especially the older members who are quite stalwart and don’t air their problems easily. 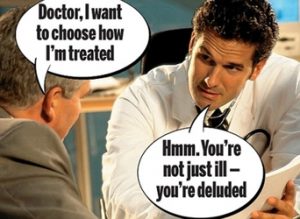 You’re not a doctor!

I’ve listed below, in alphabetical order, all the conditions 13 family members have.  Their ages range from 22 – 82 years and there are 5 females and 8 males.  I have persuaded two of them to take a Mg supplement because most of these conditions are symptoms of a Mg deficiency.  The males in the family are very sceptical of Mg’s merits and one said to me “You’re not a doctor, how do you know?”  I challenged him to ask his doctor what he knew about Mg!  In fact, I challenge you the reader to ask your doctor what Mg does for the body and see how he/she replies.

Research and question everything

In this day and age, it seems to be advantageous not to be a doctor.  That way you will have an open mind when doing your research and won’t be encumbered with dogma and paradigms which the medical fraternity seem to be rife with.  Also, you will not be in the clutches of the pharmaceutical industry!  By the way, those two family members who are taking Mg have improved their health with one of them being completely clear of all the 5 symptoms suffered before the Mg supplement which she now takes on a daily basis.

Well, here’s the list which amounts to 51 ailments suffered, which I think is quite extensive when shared between just 12 people:

7 family members are on hypertensive drugs.  Out of those, 5 members have slightly elevated blood pressure, easily controlled with a Mg supplement but these members are following doctors’ orders and taking drugs.  The other two have serious blood pressure problems, one of which has suffered hypertension since a teenager and is now in his sixties.  They are both on 4 different types of blood pressure medication including diuretics, which can cause dehydration and consequently high blood pressure.  It’s not surprising that their blood pressure is as serious as ever.  Obviously the drugs aren’t working and could be doing more harm than good.

4 family members are on statins.  Here is what Dr Sinatra says about statins, he is an eminent cardiologist: “Statin drugs can have horrific side effects. I’ve seen side effects across the board. I’ve seen weakness of the limbs, weakness of the hands. I’ve seen almost like a pre-Alzheimer’s condition where people literally forget who they are. We call it, “total global amnesia.” I’ve seen difficulty with vision, I’ve seen liver problems, I’ve seen kidney problems, polyneuropathy-I’ve seen it all. Why? Because I’m a cardiologist and I see the side effects of statins that other physicians give patients and they come to me to get them off statins and they use lifestyle changes instead.”

Statins is just one of the drugs which are overmedicated and it is one of the biggest sellers of all time giving very extensive profits to the drug companies.  The drug has been proven to be dangerous but still it is prescribed in the millions according to webmd, with Crestor  (rosuvastatin) manufactured by AstraZeneca, prescribed around 21.4 million times per month in the US and netting sales, of $5.9 billion, up to 2014.

I would therefore like to just explain how Mg does the job Statins are supposed to do.  The difference is, it does it naturally and more efficiently with no side effects, using the body’s natural processes.

Statins are being prescribed now by so many doctors and the majority really don’t know how these statins work and the side effects they create.  What I do know from my research is that statins actually turn off a regulating enzyme known as HMG-CoA reductase.  HMG-CoA is one of the 700+ enzymes that magnesium controls.  With the addition of ATP (adenosine triphosphate), Mg-ATP regulates this enzyme and controls cholesterol production.  Magnesium also raises the level of HDL (“good”) cholesterol whilst lowering  LDL (“bad”) cholesterol.

When Mg-ATP activates HMG-CoA, it regulates the production of mevalonate, a fatty acid derivative which allows cholesterol to be synthesised.  When there is enough cholesterol for the body’s needs, Mg-ATP will control the enzyme and mevalonate production will stop or reduce.

What statins do is stop and poison the enzyme so production of mevalonate ceases.  This is why cholesterol is reduced so effectively with statins.  But to permanently inhibit the production of cholesterol is foolish and dangerous.  The body has this enzyme for a reason.

If there is not adequate Mg-ATP in the body to regulate HMG-CoA, mevalonate production will not be regulated and cholesterol levels will be out of control.  On the other hand if cholesterol is halted, which is what statins do, it will impede the production of important substances in the body such as the sex hormones and the adrenal corticosteroids.  These are derived from cholesterol through a number of enzyme dependent steps, as is the production of vitamin D in response to sunlight exposure.   Again, Mg is vital for all these processes because the enzymes necessary are dependent on Mg for activatation.  By the way, statin drugs actually deplete Mg further from a patient who will already be low in Mg unless a supplement is taken.

Don’t forget, cholesterol is essential for our brain and body.  25% of the cholesterol in your body is found in your brain, where it plays important roles.  So in a nutshell:

Which treatment do you think is the better choice?

In part two, I will go through all the problems my family members have encountered whilst being treated by their doctor or in hospital.  All I can say is, if we have had so many bad incidences from just a few people (13 plus my late parents, myself and hubbie), how many other families are suffering such health blunders and being overmedicated? 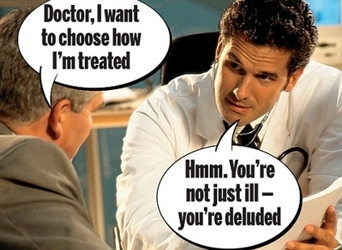 10 thoughts on “Drug Side Effects”