In total, there were 31 aircraft accidents in 2015.  Of those accidents, 17 were put down to human or pilot error, 1 unknown and one is still under investigation.  7 were due to mechanical failure, 3 aircraft were shot down, there was 1 bomb and 1 was due to bad weather.

From Toronto to Halifax. Landed short of the runway and was severely damaged. Twenty-three people were injured.  The TSB (Transport Safety Board) stated that there were no mechanical or maintenance faults uncovered with the aircraft. Evidently the most common cause of major airline accidents is “controlled flight into terrain” known as CFIT.  Pilots flying perfectly sound aircraft into the ground because of lost spatial awareness and not following protocol. Investigation is ongoing.

Causes: Pilot error.  PIC (pilot in charge) did not comply with the regulations and Standard Operating Procedures (SOP). Probable that the Crew Resource Management (CRM) did not function appropriately.

Flight from Bishkek Airport, to Osh Airport.  Touch down hard enough to shear off the left and right main landing gear. The aircraft skidded off the runway with the left engine being torn from its mount.  No fatalities, 14 injured 4 seriously.

Causes: Pilot error. Failure of the crew to comply with SOP.  Faulty steering inputs by the captain.  Lack of rectification by first officer of captian’s error.  Lack of control of speed when the pitch angle increased.  Somatogravic illusion or nose up illusion, perhaps due to fatigue.  (Somatogravic illusion is a vestibular illusion prevalent during high accelerations/deccelerations when a pilot has no clear visual reference.)  Insufficiently vigorous nose up input in reaction to ground proximity warning. 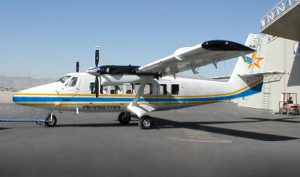 Scheduled 60-minute passenger charter flight, operated by Aviastar reported that the de Havilland Canada DHC-6 Twin Otter aircraft, was missing from air traffic control near Palopo 11 minutes after takeoff. There was no distress call from the plane. 10 dead.

Causes: Pilot error.  The NTSC (National Transportation Safety Committee) concluded the pilots changed the route and did not discuss or consider the environmental conditions that may be ahead or discuss the operational implications of flying another route instead of the one planned, leading to loss of situational awareness. 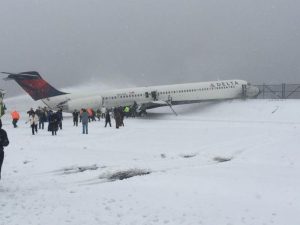 Causes: Pilot error.  NTSC found that the pilot used excessive reverse thrust which degraded the effectiveness of the rudder controlling the aircraft’s heading.

Scheduled international passenger flight operated by Germanwings, from Barcelona to Düsseldorf.  The Airbus A320-211,  crashed into the French Alps.  All 144 passengers and six crew members were killed. 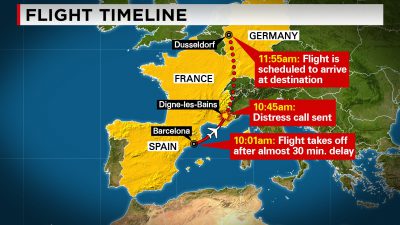 Causes: Pilot suicide.  The crash was deliberately caused by the co-pilot Andreas Lubitz.   After reaching cruising altitude and when the captain was out of the cockpit, Lubitz locked the cockpit door and started a controlled descent.  The aircraft crashed into a mountainside in the French Alps.

Upon searching his property evidence was found that Lubitz had been declared unfit for work by his doctor. This fact was hidden from his employers.  Lubitz had suffered severe depression for a long time as well as a constant ringing in his ears known as tinnitus.  He was plagued by insomnia and vision problems, complaining that he was seeing stars, halos, flashes of light, streaks, and flying insects. He also had light sensitivity and double vision.  His ophthalmologist said “he was full of fear”.  His family doctor diagnosed an “emergent psychosis“.  He was said to be motivated by fear of losing his licence because of his sight disorder.  With the fear of blindness he started researching ways to commit suicide.  He was prescribed mirtazapine and lorazepam.  Lorazepam should not be taken if a patient has suicidal tendencies.

The conditions I have highlighted are all common side effects of aspartame ingestion. If Lubitz had been using aspartame over the previous years, regularly drinking diet sodas, putting ‘equal’  into hot drinks, consuming diet foods such as yoghurts, puddings and other aspartame sweetened products, he could have succumbed to psychotic tendencies. His obvious suicidal tendencies is further evidence of possible aspartame reactions, apart from the drug lorazepam he was taking.  Suicide is a personal and individual act and committing murder is not normal for those wishing to end their lives which could indicate a psychotic state of mind. 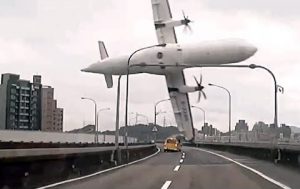 A ten-month-old ATR 72-600 aircraft crashed into the Keelung River shortly after takeoff from Taipei Songshan Airport.  The TransAsia Airways flight was flying from Taipei to Kinmen (Quemoy), a Taiwanese island off the coast of mainland Fujian.  38 dead, 15 survivors.

Causes: Pilot error.  There was an uncommanded autofeather of engine No. 2.  The pilot reduced power and subsequently shut down operative engine No. 1.  There was a failure by the flight crew to use SOP which resulted in confusion in identifying the nature of the propulsion system malfunction. 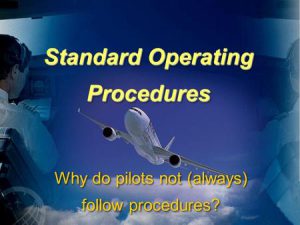 Why are these pilots not following their training?

Whenever there is a pilot error incident, IMHO, because the FDA refuses to take aspartame off the market, other measures need to be put into place.   Apart from considering fatigue and stress during an investigation, consumption of aspartame laced dietary products should also be considered as a possible cause of impaired mental acuity, confusion, anxiety, irrational behaviour and other symptoms that could adversely affect a pilot’s ability to cope with an emergency situation.  Some of these pilot errors are just so obvious! Why would the flight crew fail to use SOPs.  What about CFITs.  Unless there is a serious problem with the aircraft or bad weather why would an experienced pilot fly into terrain and not make the airport runway or shut down the wrong engine?  Since 1984, I have found 11 incidences where the wrong engine was shut down or feathered, killing 204 people in total.

Again, the errors often seem quite mundane and you would expect an experienced pilot to cope with these difficulties during a flight, unless there’s something seriously wrong with the aircraft or exceptionally bad weather.

Civilian Two helicopters collided near Villa Castelli in Northwest Argentina.  All ten people on board the two aircraft were killed. Cause: Pilot error.  A video of the accident appears to show that the lower of the two helicopters climbing at a rate faster than the other one, colliding with it from below.

Civilian An Embraer EMB-505 Phenom 300 crashed into a car auction site in Hampshire, United Kingdom, killing pilot and three passengers. The pilot overshot the runway during the landing attempt.  Cause: Pilot error. 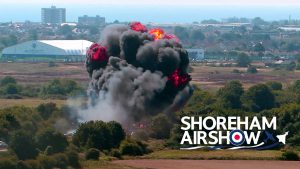 Airshow A vintage jet aircraft crashed during a display at Shoreham Airport, England. 11 dead, 16 injured.  Cause: Pilot error, the aircraft was too low to perform the loop.

Air Show Training. A 2015 Červený Kameň mid-air collision occurred when two Let L-410 Turbolet aircraft collided in mid-air over Červený Kameň, Slovakia, and crashed in a forest. The aircraft were carrying 17 parachutists and 2 pilots each. 7 killed, 31 survived. Cause: Pilot error. The agreed distance of 100m apart for these two aircraft was not adhered to with one plane becoming closer to the other lead plane.  The captain, and Pilot Flying, was recording video on his mobile phone. He held the phone in his left hand and the controls in his right hand! 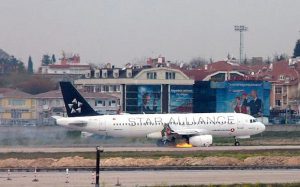 Commercial Turkish Airlines Flight 1878 from Milan, Italy to Istanbul, Turkey.  A very hard touchdown resulted in substantial damage to the starboard wing and a fire. At a second approach attempt, the plane veered off the runway. All 102 passengers and crew survived. Cause: Human error.  The flight crew claimed the wake turbulence from the plane that landed ahead of them caused the accident.  I’m not sure which human was at fault here, was it ATC, bringing the flight in too close to the plane ahead, or the pilots who may have reacted inappropriately?

Cargo Carson Air Flight 66, was a Swearingen SA226-TC Metro II, on a domestic cargo from Vancouver to Prince George, both in British Columbia, Canada. The aircraft crashed into a mountain en route to Prince George Airport, killing both crew members. Cause: not established.  An autopsy found one of the pilots had a blood alcohol level of 0.24%.

Commercial Ceiba Intercontinental Airlines Flight 71, a Boeing 737-8FB flying from Dakar to Cotonou collided with an air ambulance operated by Senegalair over eastern Senegal. The 737 landed safely, but the air ambulance crashed, killing all 7 on board. Cause: The Air ambulance HS (Hawker Siddeley)125 was asked to fly at a height of FL340 but was actually flying at FL350, the same height the Boeing 737 was given. The HS 125 has never been found but was thought to have gone into the ocean.

A sightseeing Eurocopter AS350 helicopter, operated by Alpine Adventures, crashed on Fox Glacier in the South Island of New Zealand. All seven people on board died. Cause: Human error. The helicopter had been involved in three previous crashes before this fatal one.  The CAA advised that the operating licence of James Patrick Scott had been surrendered. Scott and Waterland plead not guilty to the Health and Safety charges. The company’s 15 helicopters were grounded.

Commercial Trigana Air Service Flight 267 by Indonesian domestic airline Trigana Air Service from Sentani to Oksibil eastern Indonesian. The aircraft crashed about 30 minutes after takeoff, killing all 49 passengers and five crew members.  Cause: Human error.  It was found that the flight manifest was from another Trigana flight.

Military and Civilian USAF F-16CJ Fighting Falcon collided with a civilian Cessna in South Carolina, US. Both occupants of the Cessna were killed; the pilot of the F-16 ejected safely. Cause:  human error ATC (air traffic control) 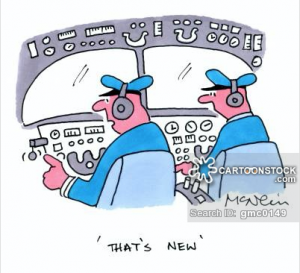 Of all the pilot errors, so many of them seem to be unlikely for a fit and fully trained pilot to make.  There is a possibility that these pilots and crew could have been influenced with something ingested.  A pilot who would not comply with SOP, would seem very unlikely, unless that pilot was experiencing a loss of mental acuity or other problems such as severe headaches, vision problems, confusion, memory loss etc.  Fatigue and stress could also be a contributory factor as a pilot’s schedule is nearly always hectic.

There are 92 known side effects of aspartame.  I’ve listed some below which IMHO could adversely affect and interfere with how a pilot and crew fly their aircraft, especially in an emergency and having to comply with operating procedures and make complex manoeuvres.  Add these side effects to fatigue and stress and you could understand how a pilot may suffer a serious episode, which he would have no control over.

And to finish – this will make you proud of our amazing pilots…
This Captain landed the 747 on a VERY short runway, hence the applause!

Are you a pilot or have a pilot in your family?

Whether you’re a pilot or not, do you use aspartame products such as diet coke, diet pepsi, sprite or other diet sodas?  Do you use  NutraSweet, Equal, Spoonful, Equal-Measure, Neotame, NutraSweet.  Have you had any experiences or know of pilots or crew that have had a health problem whilst on board a flight?  It would be great to hear from you, even if it’s

anonymously.  Even if you don’t make contact, please, please stop using this chemical concoction.  If you want to know how and why aspartame was passed by the FDA have a look here. It is a shocking trail of fraud and misdemeanour. 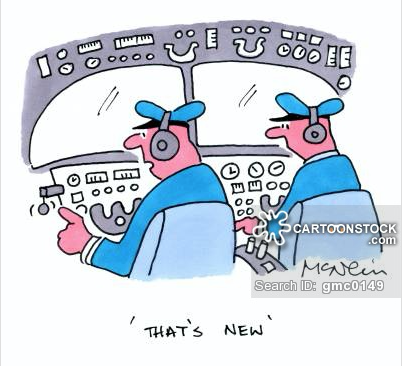 Article Name
Flight Safety - Aircraft Accidents of 2015
Description
The 3rd part of this trilogy deals with a specific year, 2015. 17 of these aircraft accidents were put down to human or pilot error.
Author
Ches Power
Publisher Name
https://magnesiumandhealth.com
Publisher Logo