Everyone who contracts PD will have differing symptoms which will be evident at different stages of the disease.  The notion of people and Parkinson’s is that the main symptoms that are suffered are tremors and shaking.  These are physical conditions, but what about the mental problems that people suffer like depression and panic attacks, anxiety and stress.  Without a positive mental attitude and outlook PD sufferers will have difficulty coping with the physical symptoms of the disease which can also include pain in various parts of their body, overwhelming tiredness, constipation, sleeplessness etc.. These problems will have a dramatic impact on their lives as they try to come to terms with their condition on a daily basis. 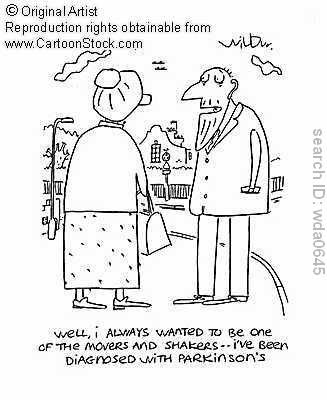 The condition will progress though, at varying speeds but as this happens, the amount of care and support required by each patient will have to re-evaluated.  This also goes for the treatment that each patient is receiving.  This treatment will have to be monitored to make sure the patient is having the best and most appropriate medication for the stage their condition is at.  Many people though, tend to maintain a good quality of life with a limited amount of care and treatment.

There is no evidence to suggest that Parkinson’s is generally hereditory.  In the majority of  cases it is considered a non-genetic disorder.   It is very unusual to find more than one close family member suffering from it.   In a small number of cases though, a first-degree relative can have the disease and a low percentage of sufferers are found to have a form of Parkinson’s that occurs because of a mutation of one of several specific genes.  Generally the most common form of Parkinson’s, is defined as ‘primary parkinsonism’ or ‘idiopathic parkinson’s’ which means there is no external identifiable cause of the condition.

What are the Causes of Parkinson’s Disease?

It is known that Parkinson’s occurs due to a loss of nerve cells in the mid brain, an area called the substantia nigra.  These particular cells produce dopamine the loss of which affects the balance of it with acetylcholine, resulting in messages to muscles becoming jumbled.  Why these nerve cells die seems to be a mystery to most medics and specialists in the field and many will tell you that the cause is unknown.  Patients are often told…

…it is not known why these nerve cells die 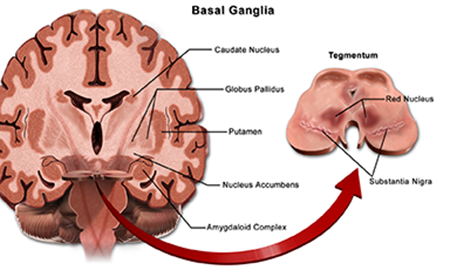 There is, however, much evidence to indicate that metals such as aluminium can significantly contribute to the degeneration of the nervous system which occurs with PD.  An autopsy study showed elevated levels of Calcium (Ca) and aluminium in Parkinson’s victims’ brains, compared to people with normal brains.(1)  It is known that if Magnesium (Mg) is deficient in the body, it will allow Ca to migrate and calcify and can also adversely affect the proper function of hundreds of enzymes which need Mg as a cofactor.  Metals such as aluminium, lead and cadmium can latch on to certain enzymes if Mg is depleated, thus preventing normal enzymatic activity or causing abnormal function leading to cell death.

The following statement, or something like it, is what PD patients are also often told…

…You may need to take more medication, leading to a lot of pills to manage.

This is a catch 22 situation.  As symptoms worsen and Parkinson’s progresses, more medication is prescribed to try and alleviate the worsening conditions.  This in turn gives way to more side effects which have to be addressed with more medication and so it goes on. 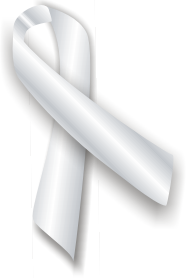 So why only drugs?

As advances in the treatment of Parkinson’s continue, the quality of life for people with the condition will hopefully improve but personally, I don’t think enough is being done to utilise natural nutrients and find out why and how this devastating condition happens.  The emphasis is on drug therapy.  Drugs have their place in our health when nothing else is viable but why are we not utilizing nutrients that have been proven to diminish symptoms often more effectively than drugs.   Drugs are made from chemicals that are often unnaturally put together.  They would not be in the body normally which leaves the patients’ health wide open to side effects.  If the body can utilise what would naturally be in it’s makeup, then there is a better chance of getting relief from any disease without causing more havoc with unwanted side effects.

Many people with Parkinson’s lead active and fulfilling lives but how much better could these lives be if we were using natural vitamins and minerals to aid relief and perhaps avoid the disease altogether.

It is not easy to maintain a positive outlook when Parkinson’s sufferers can only look forward to worsening symptoms.  Support and advice is in abundance on how to make the best of things whilst living with PD but more could be done.  The drug companies are in control and it’s their drugs they want to push, certainly not some cheap natural nutrient which will give them zero profits, despite possibly being a better option than some of the lethal drugs touted by Big Pharma.

Not only do the Parkinson’s victims suffer, but so do their families and carers.  This is the same for all of those who have come down with a debilitating illness.  There is often hope from the simplest of nutrients but this isn’t even considered by most medics because all they know about is drugs and medical procedures that are often hit and miss, with patients commonly being used as guinea pigs.

Can I avoid contracting this disease?

Now there’s an interesting question.  There is a concensus of opinion from the powers that be, that there is no cure for this disease and the only control or relief is by way of prescription drugs and medical procedures.  Also, the estimated 75% of ‘idiopathic’ Parkinson’s sufferers are told by medics that the reasons for them contracting it is unknown.  If the cause is unknown then there is little hope of finding a solution.

There are a few doctors and researchers though, who have come up with radical reasons as to why the majority of sufferers succcumb to Parkinson’s and more importantly, what can be done to drastically reduce our chances of being stricken by this illness.

What is amazing to me is that this addition to your medication regime is hardly ever suggested by our medics.  Why is this?   Are prescription drugs pushed by the drug companies in favour of natural remedies?  Does Big Pharma put patients first or money first?  Are there alternatives that will work just as well without the nasty side effects?  Are drugs being used that are doing more harm than good?

The final part of this article will be published on Sunday 10th 2016 and will cover other ways to help avoid this disease or alleviate its symptoms if you are a sufferer.  Please look in, read and comment.  Your information is important to us, don’t be shy, let us know what you think and give others the benefit of your experience.

If you have experiences of PD either as a patient, a loved one and/or carer, please let us know your take on this disease by commenting below.  You may have information that can help other sufferers!  Ches Power

Article Name
People and Parkinson's - Part 3
Description
The notion of people and Parkinson's is that the main symptoms that are suffered are tremors and shaking. These are physical conditions, but what about the mental problems that people suffer like depression and panic attacks, anxiety and stress.
Author
Ches Power

6 thoughts on “People and Parkinson’s – Part 3”