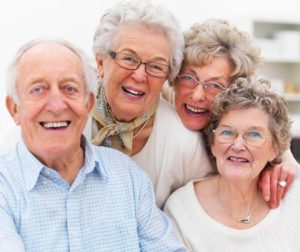 Families are worried about their older relatives succumbing to the COVID 19 virus. I want to talk about Covid 19, Sepsis and the HAT Protocol. You need to read this and keep it as a reference, just in case

Those of us who are fit and healthy are not too concerned about being hit by this new virus, but we do worry about our older relatives and how they would cope if they contracted this disease.

I won’t go into the figures of how many people have caught this virus and the subsequent deaths. Suffice to say, in countries considered to have a good standard of living, the death rate is between 1-2% ie. 1-2 people in every 100. This now seems to be increasing but figures can be misleading, especially as we don’t know how many have had the disease already and got over it. We only know those that have been tested and out of those tested, the number of mortalities.

As for Italy, it would appear that many of those contracting the virus are of the older generation and this is why their death rate seems to be higher than most other countries. It has also been suggested, true or not I don’t know, that many of those who have died in Italy were males who were also smokers! 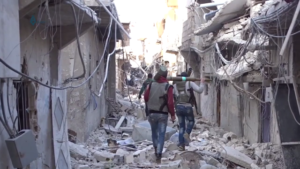 Exceptions to this 1-2% will be those countries with poor health, living in a war torn areas, displaced from their homes, losing loved ones to war. Vulnerable people because of how they are forced to live, stressed, poor health, poor diet, poor living conditions etc. They will succumb to this virus more readily.

A few weeks back, I did write about Sepsis and how a possible amazing breakthrough was saving lives. Evidently, 1 in every 5 lives lost are due to Sepsis. This was a shocking revelation and most people were surprised that this seemingly not so common disease, was causing such havoc to our health.

Research into COVID 19 and Sepsis

I have been looking around for how COVID 19 actually progresses as a disease, especially in those that have been admitted to hospital and subsequently died. The majority of patients get over the illness, but those who don’t are often hit by sepsis which, as we know, can be a killer. In fact it is a common ‘end of life’ disease, hence the 1 in 5 figure. 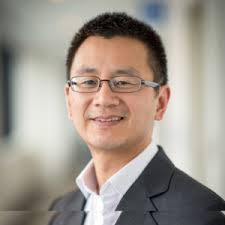 I read with interest, an article by Allen Cheng of Monash University. He is a Professor of Infectious Diseases and Epidemiology. He has  written about the severity of the Wuhan coronavirus and how is causes severe illness.

“There’s much we’ve yet to learn about this new virus, but we know it often causes pneumonia, an infection of the lungs which produces pus and fluid and reduces the lungs’ ability to absorb oxygen.

Of the first 99 people with severe infection, three-quarters had pneumonia involving both lungs. Around 14% appeared to have lung damage caused by the immune system, while 11% suffered from multi-organ system failure, or sepsis.”

He goes on to say:

“Secondary bacterial pneumonia is more severe than influenza alone – in hospitalised patients, around 10% of those with influenza and pneumonia die, compared to around 2% of those who don’t have pneumonia.

Although it can be difficult to determine whether organ damage from the Wuhan coronavirus is a result of direct viral infection or indirect ‘collateral damage’ from the immune system, initial reports suggested around 11% of people severely ill with the Wuhan coronavirus experienced sepsis with multiorgan failure.”

But I take issue with this statement:

“So far no drugs or interventions have been able to dampen this immune response. Although several treatments have been proposed for Wuhan coronavirus, none have yet been shown to work.” 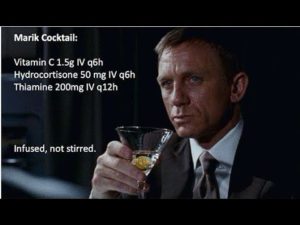 For those patients who do succumb to this new virus and go into septic shock, the HAT protocol is definitely worth trying. The problem is, the hospital will probably refuse to give the treatment because of  ‘dogma’ and  ‘protocol’. Patients with sepsis will be treated the same way as they always are. Even if the patient is dying, they will not try this new protocol, despite it being completely safe, very cheap and very effective!

This protocol has saved lives already

If you have a beloved relative in front of you dying from sepsis, don’t you think he or she would want you to try this new protocol?  This protocol has been used in the US and saved many lives. Even patients expected to die within a few hours have recovered, with no injury to vital organs. But even if you don’t believe in it, your relative is dying, so what’s to lose?

So what’s the problem… Money!

So why does a medical professional, treating your beloved relative, watch your loved one die rather than try a new treatment?

The pharmaceutical industry cannot make any money out of this treatment because it uses ingredients that are natural and/or have already been on the market. So it can’t be patented. No patent, no profits. What’s more, if this treatment is affective, what will happen to the ‘gold standard’ treatment already being used, the drugs of which are supplied by the pharmaceuticals? Their ‘bottom line’ would definitely suffer! 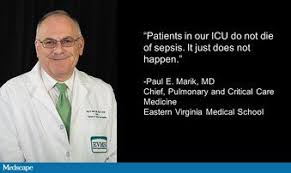 In January 2016 a critical care doctor working out of Sentara Norfolk General Hospital in East Virginia tried a new protocol on one of his patients. This lady was about to die. She was not expected to live through the night. Dr Marik had read a research paper about a new protocol for sepsis. Looking down on his dying patient, he thought he would try the new treatment. After all, there was nothing to lose!

Below is an interview with Dr Marik. This doctor is genuine. He is obviously a dedicated medic and cares passionately for his patients. This man is not interested in profits or the bottom line. Unlike the pharmaceuticals, who are already at his throat for introducing this protocol. To them, it doesn’t matter that it works! What matters is it isn’t their protocol and is a threat to their profits. Since Dr Marik started using this protocol, he has been hauled over the coals and ridiculed by the pharmaceuticals and those in collaberation with them.

If you haven’t got time to watch the above video, just watch this short 2 minute interview with the nurses who look after Dr Marik’s patients .

So what do you think?

Do you think this doctor is a quack? Or is he doing what he knows will get his patients out of the front door and home, instead of out the back door in a box! The treatment is safe and will not affect the patient adversely, ie. it will not make the patient any worse than he or she already is.  If you are in the US you’re luckier than us in the UK. The UK has not even attempted to use this protocol thus far. In the US, it is being used in Dr Marik’s hospital and a number of other hospitals throughout the US. 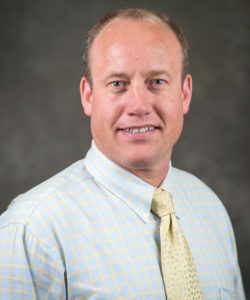 Dr Kory is the Principal Investigator for a Clinical Trial taking place now. Started in April 2019, it is due to complete in April 2020. The title of the trail is: Outcomes of Septic Shock Patients Treated With a Metabolic Resuscitation Bundle Consisting of Intravenous Hydrocortisone, Ascorbic Acid and Thiamine.

The trial notes explain how ascorbic acid deficiency leads to shock and multi-organ failure and that the HAT therapy appears to be of high utility in preventing death and multi-organ failure in septic shock. IV high doses of ascorbic acid rapidly achieves not only normal levels but even supranormal levels. Also history as far back as the 1950s appreciated the importance of this vitamin. In 2006, it reared its head again only to be shot down once more, even after trials in 2014 reported the high efficacy of IV ascorbic acid. How many have died of sepsis because of the dogma, bigotry and dragging of heels of the medical industry. 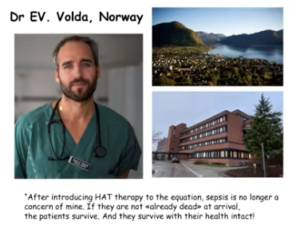 “After introducing HAT therapy to the equation, sepsis is no longer a concern of mine. If they are not <<already dead>> at arrival, the patients survive. And they survive with their health intact!”

What if your relative gets sepsis?

You now have the information to give to your medic if you or your loved one becomes very ill with sepsis or progresses to sepsis after infection from COVID 19. Unfortunately, you will have a fight on your hands but hopefully your medic will use it wisely and not dismiss it out of hand. It depends on the medical professional you’re dealing with and the hospital’s protocol. I might add, this protocol works at its best if used as early as possible.

So what is the recipe?

Here we go, the recipe for the HAT protocol:

Should I wear a mask?

Dr Jenny Harries, England’s Deputy Chief Medical Officer says: “It was not a good idea for the public to wear face masks as the virus can get trapped in the material and infect the wearer when they breath in”.  As always with experts, there is controversy over face masks. You must make up your own mind but do they give a false sense of security? IMHO, the only way for a mask to protect, is if it paired with a face shield which protects the whole face including the eyes.

“While the majority of individuals affected by COVID-19 will not develop life-threatening sepsis, the global threat posed by COVID-19 does underpin the need for all citizens and healthcare workers to ensure they are familiar with the early signs of sepsis and appreciate that sepsis can be caused by a multitude of infections, such as this novel coronavirus, other viral infections, seasonal influenza viruses, or common bacterial infections such as pneumonia, urinary tract, abdominal, or wound infections.” 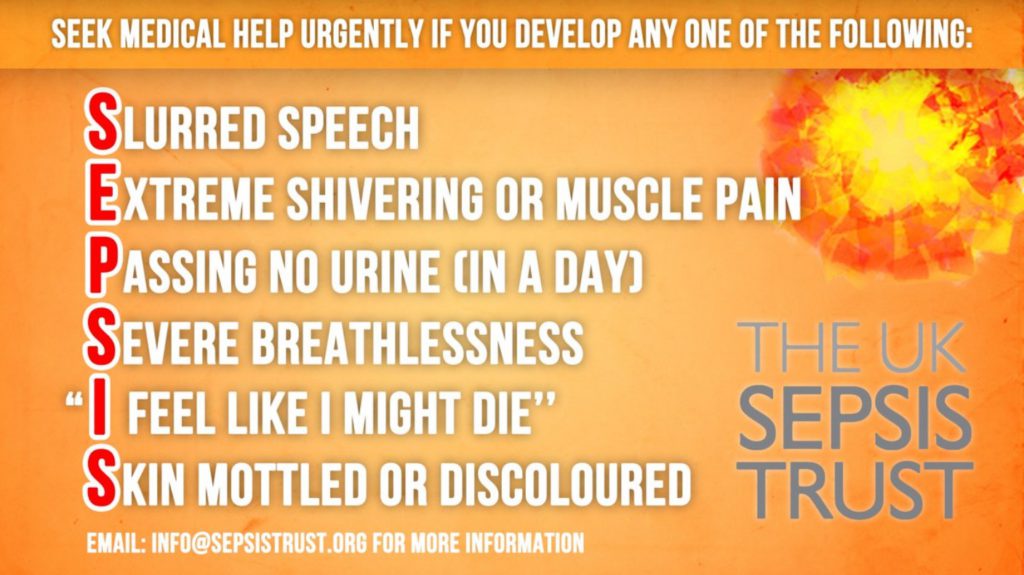 Sepsis kills 1 in every 5 people. It is often the last stage of a serious infection such as COVID 19. Sepsis is  caused by numerous infections, whether bacterial or viral. This includes pneumonia, urinary tract, abdominal or wound infections. We all need to be aware of this serious condition and take quick action if it is suspected, especially now as we are up against this new virus COVID 19. 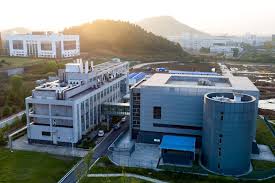 Just a piece of information for you. The Wuhan Institute of Virology is a research institute administered by the Chinese Academy of Sciences (CAS) on virology, and is located in Jiangxia District, Wuhan, Hubei, China. In 2015, the Institute opened a biosafety level 4 laboratory in Wuhan, the first in mainland China… 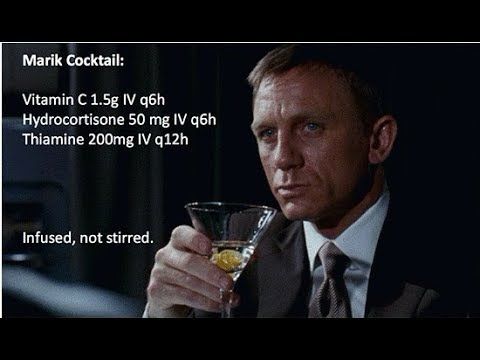