Albert D Biderman, back in 1957, explained the tactics of manipulation of the masses and how it is achieved. This is what is happening with many governments around the world. Compliance through fear is tantamount to tyranny. Below are the lists of how Biderman says this is achieved. 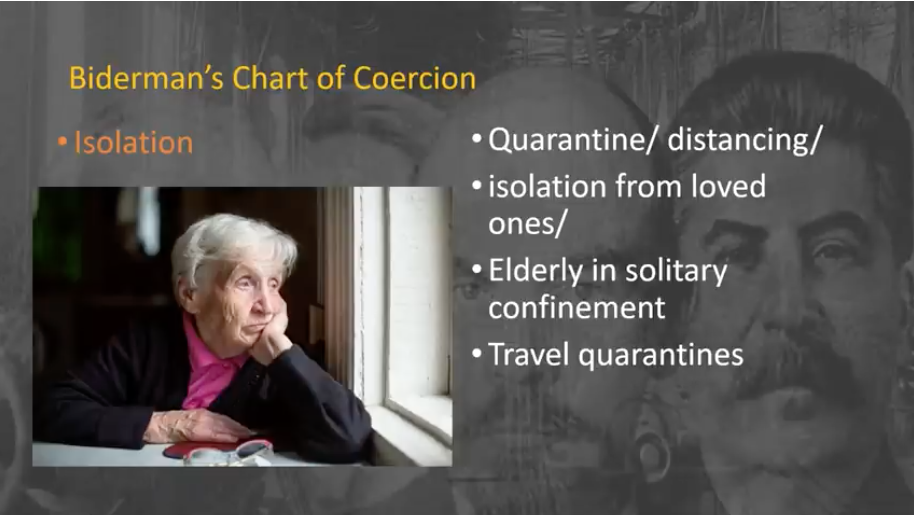 Quarantine/distancing  – This involves an enforced isolation by way of a lockdown and house arrest. Various lockdowns have been enforced since 23rd March 2020 (UK).

Isolation from loved ones – This includes keeping family members apart.

Elderly in solitary confinement  – The elderly and/or sick are kept in solitary confinement. No visiting allowed in hospitals or care homes and those dying will not have the comfort of their family and friends to ease their passing. They will feel abandoned, uncared for, not wanted, not loved. This will cause depression, anxiety, loneliness and will affect their state of health in body and mind.

Immunity levels will plummet – Exacerbated by a lack of fresh air, exercise and the company of loved ones. With no quality of life, they will give up and die before their time. Draconian policies are killing our elderly and sick, but perhaps that’s what they want! Removal of the elderly and infirm will reduce pension and disability payments and free up hospital beds.

Travel quarantines and restrictions – This is still in force with sudden changes of restrictions which disrupt personal plans, cost money to the economy and the public. Quarantines are enforced without notice which adversely affects those who have booked holidays or are returning home from certain holiday destinations and visits. 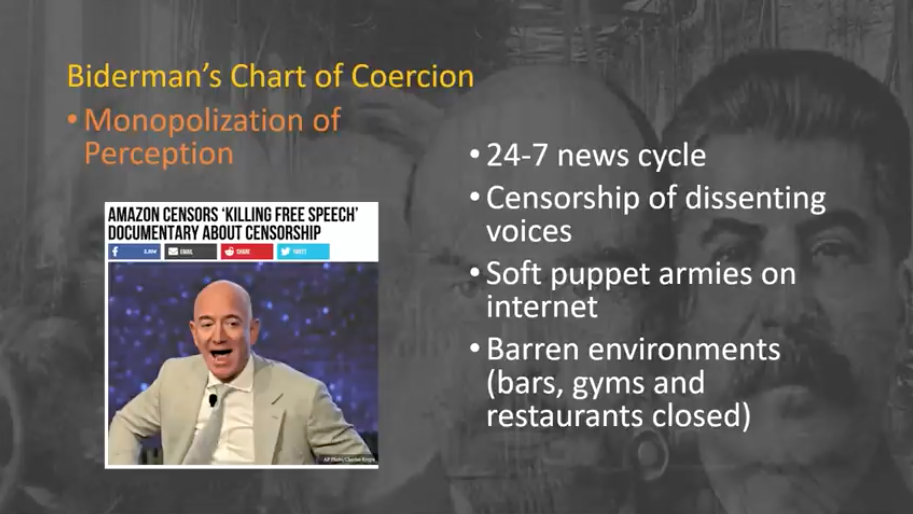 24-7 news cycle – For those forced to stay home, their only news is what they see on main stream media. All news is one sided and censored and this is all the public sees. Government is not challenged. MSM are just hierarchy mouthpieces; real journalism is dead. The media uses scare tactics, interviewing those mourning a relative, continuing to give out case number details, all of which serves to keep the public terrified. We don’t even know what is true and what is manipulated. Everyone is confused. Confusion aids compliance.

Censorship of dissenting voices – So called ‘scientific advisors’ consist of just a small number of chosen speakers who always speak the party line. Anyone who challenges their science, or lack of it, is censored and berated. Research and science not in agreement with the hierarchy is banned and or censored and or vilified.

Soft puppet armies on the internet – This is the use of ‘soft’ puppet armies on internet – Social media is scanned and banned when anti hierarchy. So called ‘fact checkers’ who are well paid and usually just out of nappies, stamp ‘fake’ on the work of eminent scientists, researchers and doctors. Most of which are more capable and learned than any of the *government’s ‘conflict of interest’ advisors.

Barren environments – Leisure facilities such as bars, gyms, restaurants, cinemas etc. are closed or curtailed frequently and suddenly without notice. This continually keeps the public anxious and the facility owners fearful of losing their business. Consequently, these busnesses have to bend over backwards to follow the silly rules. We know they are farcical, but ruling by fear ensures compliance and increases business closures.

Attacks on non-compliance – Berating those who don’t comply and issuing heavy fines on those expressing personal freedoms, another scare tactic, especially as the government has made sure most of us haven’t the money to pay fines.

Enlisting the help of famous people – such as Julia Roberts, Tom Hanks. Eminem criticising non-mask wearers on rap track and accusing people of spreading COVID-19 by not wearing a mask. This despite no scientific proof that masks stop viral spread and **dismissing scientific proof that masks can be deleterious to those wearing them. These scientific facts are hidden from the public and those found on the internet are censored. 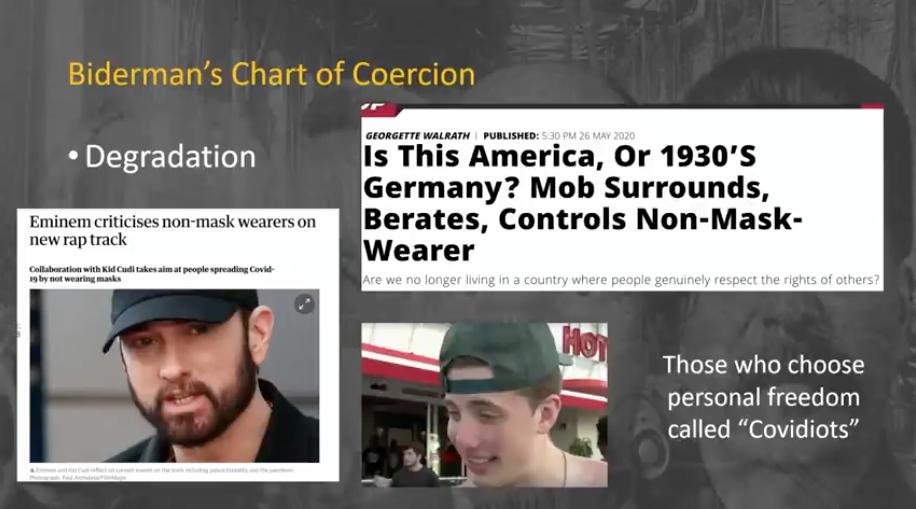 Employing snitches and snoops – with government members encouraging people to snitch on their neighbours. This tactic is to split the public, pitting people against each other.

Accusing young people – of being selfish because they want to have a good time and be with their friends and enjoy their youth which the government is trying to ruin for them. Locking down Universities and Colleges because of a few more ‘cases’. Deaths are not mentioned, probably because there are very few that can actually be put down to C-19.

The CDC said in September 2020 – that only 6% of US deaths cited C-19 alone. This does ask the question, what of the other 94%. This means 94% of deaths had at least one or more co-morbidities which could or could not have been the prime cause of the death of the patient.  It makes you wonder if the death toll from C-19 is much lower than stated, especially as governments seem to purposely panic and frighten the public into submission.

Don’t forget – flu season is upon us and those dying of respiratory diseases will include the flu and other conditions such as COPD, lung cancer, asthma, brochitis, emphysema, cystic fibrosis and pneumonia and other non covid conditions. Don’t assume all those dying of a respiratory disease are all dying from C-19! Covid numbers have notoriously been exaggerated to keep the population fearful and anxious.

Below is an image we did of a one day old surgical face mask using our Scanning Electron Microscope (SEM). The width of the micrograph represents just 0.05mm (1/20th of a mm). Imagine how much more bacteria and pathogens are on the WHOLE of this mask! How many people are becoming infected from their own mask? Not of C-19 but more likely from bacterial or fungal infections which can weaken the respiratory system.

A facet of our immune system

We breath out stale air for a reason, it is part of the many facets of our immune system. Breathing into your lungs, what you have breathed out, is not a good idea and can make you more susceptible to more serious complaints! I have asked many people how long they’ve had their mask and not one person has said they throw away their mask after just one use. Those with cloth masks usually wash them periodically. But mostly, masks are stuffed in pockets or bags, hung around necks, held in hands or left hanging on an ear. The prime reason why so many litter the ground, turn up on the beach and come in on the tide!

Keeping elderly dependent – Many sick and elderly too fearful to leave home and rely on others to supply food and necessities, that’s if they are lucky enough to have the help they need. Many independent elderly, who have nobody to look after them, are now being found dead or near to death, in their homes! 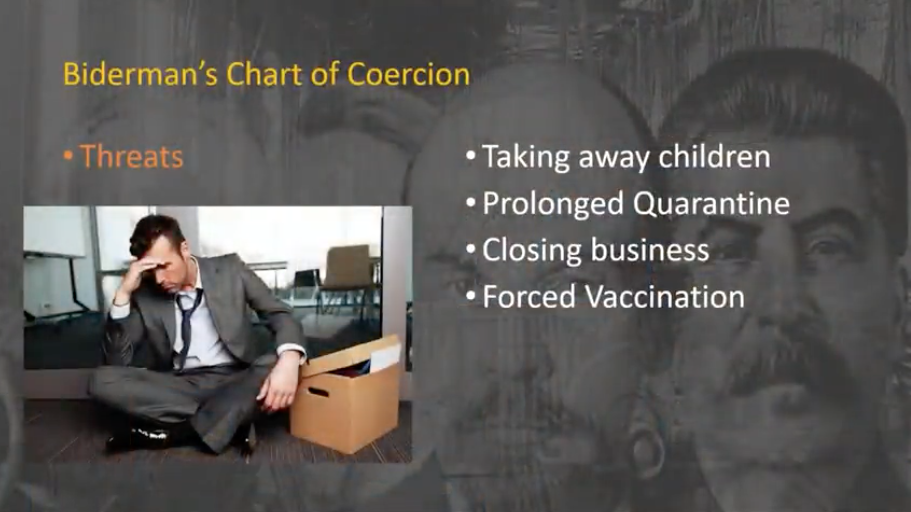 Taking away children – Child taken if parents do not allow vaccinations. Child taken away if parents want alternative treatments to medical protocols such as chemotherapy. This is happening in the US right now!

Prolonging quarantine – More lockdowns threatened if public do not behave themselves.

Closing business – loss of jobs, business, suicides up, depression up, violence up.

Forced vaccination – Mandatory jabs threatened if we baulk at being vaccinated. Also, those that are vaccinated will get a passport so they can travel. Those who refuse to be vaccinated…? 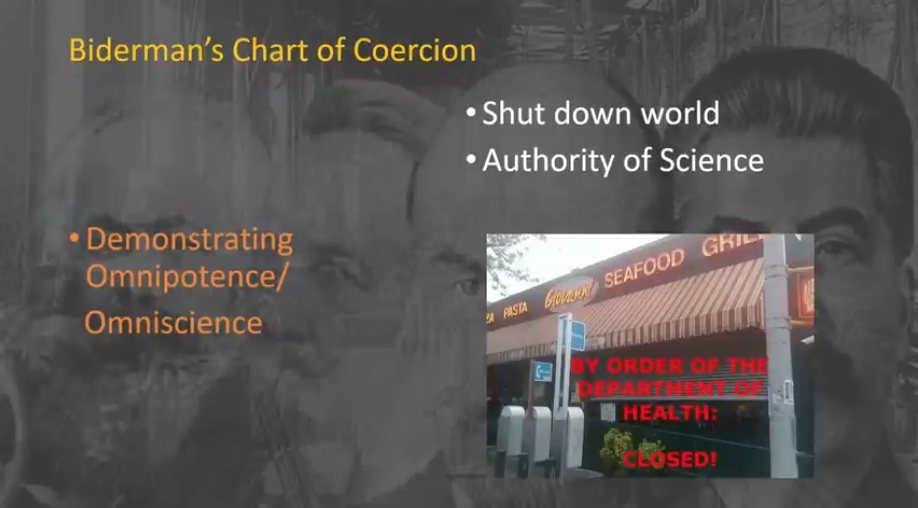 Shutting down the world – this has been done already

*Authority of Science (Technocracy) – only mouthpiece doctors/scientists and main stream media allowed to speak. Of course, they will have conflicts of interest. For example, our so called scientists Sir Patrick Vallance and Prof Chris Whitty have serious conflicts of interest with the Bill & Melinda Gates Foundation (Whitty given $40 million) and vaccine maker Glaxo Smith Kline (Vallance has £6.1 million in shares). 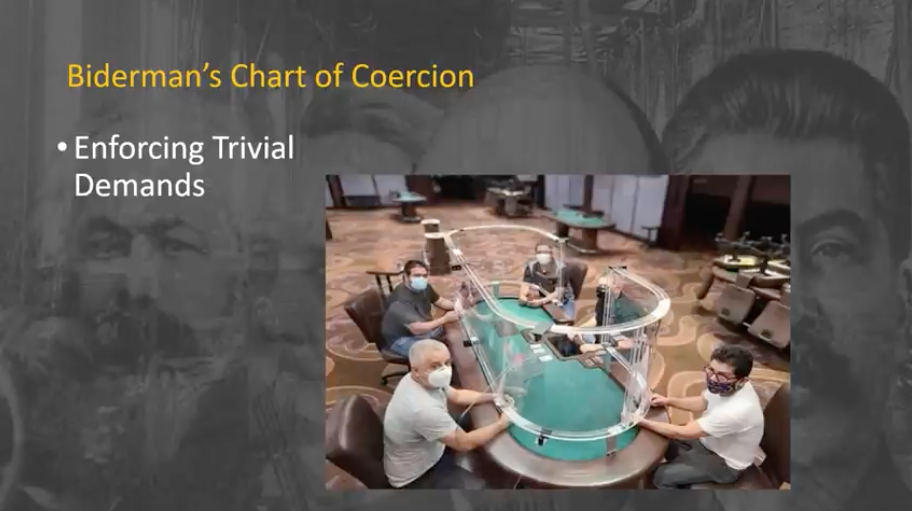 Enforced mask wearing – Ludicrous enforcements such as wearing a face mask outside in the fresh air, in the park or on the beach. Face masks should NOT be mandatory, it should be a matter of choice for the wearer.

Distancing – Rules for singing (choirs) and laughing.  Keeping distance in sports events, parties, dining out, meeting in the home. Restricting the numbers allowed to participate in a meeting or gathering. The hierarchy would not want large meetings of dissent and discussions on how to get public freedoms back or organise a demonstration.

Demands – Restricting wedding and funeral numbers to a paltry few. Curtailing entertainments by closing them or reducing pub opening times and increasing where masks have to be worn and increasing social distancing rules for the foreseeable future. 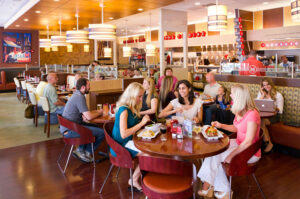 Temporarily relaxing the rules – Relaxing the rules for a short while and then reinstating them because the public have been disobedient. Hence the hierarchy says it has to put rules back. In other words, it’s the public’s fault, not the government’s. This only serves to lengthen the time it takes for the virus to dissipate. No matter how long you lockdown, the virus will still be there when you come out. This virus was waning way back in the spring, like all viruses do. They are seasonal, just like other coronaviruses.

Are you enjoying your subjugation? Do you enjoy being so afraid that you will do anything the government says . Or would you prefer to go back to the ‘old normal’.  Will you comply, until you die?

Meaning of Subjugation – The action of bringing someone or something under domination or control. The colonial subjugation of a country by means of military force. The fear of human subjugation by technology.

Meaning of Tyranny – government by a ruler or small group of people who have unlimited power over the people in their country or state and use it unfairly and cruelly.  A situation in which someone or something controls how you are able to live, in an unfair way.

What would you prefer? 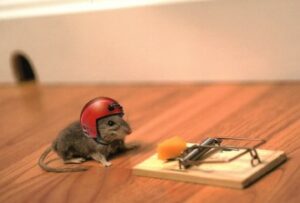 Life is a risk

Life is a risk and we all live with uncertainty. But we all die and I don’t know about you, but I would rather live completely free and take my chances. If you ask most people, including the older generation, what they would prefer, I can guarantee they would go for being with their family and friends and be free to live their lives unfettered. Being locked up is not an option and is counterproductive.

Responsible citizens will isolate if they get flu-like symptoms, that’s a given. The hierarchy are treating us all like simpletons, it is insulting. We are responsible for our own lives, our own safety and the safety of our families. 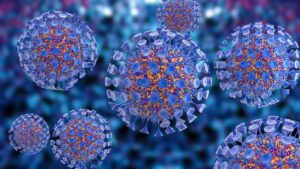 Most people have no idea how minute a virus is. For your information the SARS-CoV-2 virus is around 125nm (nanometres) which is the normal size of other corona viruses. *Microscopical analysis was done on the surface morphology and filtering efficiency of cloth masks. Cloth masks are common and mostly used by the public. Most medical staff use blue surgical masks. N95 masks are worn to a lesser extent. None of them are effective against viruses. END_OF_DOCUMENT_TOKEN_TO_BE_REPLACED