Can sepsis be cured? I was watching an advert about guide dogs for the blind and two people were in the ad. One had a guide dog already and the other was hoping to get his own guide dog soon. They both had gone blind, one from a spinal infection and the other from sepsis. 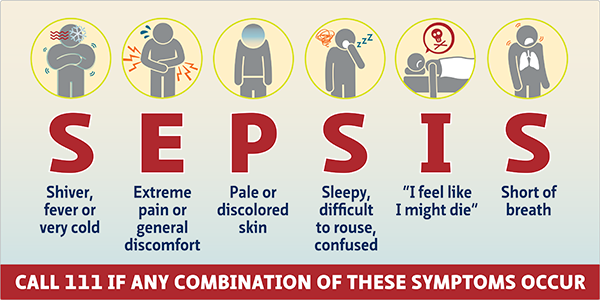 There is a treatment for sepsis and infections!

Contemplating the advert, I was wondering why it was that these two people had gone blind in the first place. Was it a case of not getting treatment quickly enough or was it a case of not being given a treatment, that is known to control and clear up sepsis and other infections quickly and effectively. What’s more, this treatment has been available since 2017 and given this protocol, it is highly likely these two people would not have gone blind.

This treatment is known to be harmless even at high doses but still lies in obscurity as far as allopathic medicine is concerned.  But the problem with this therapy is, it’s not a drug! It consists of 2 natural vitamins and a hydrocortisone which has been proven to knock sepsis on the head, even if the patient is at death’s door. If a patient is beyond help with the drug treatment, why not try this protocol. Afterall, there’s nothing to lose, except profits for the pharmaceuticals!

Now, just released, a comprehensive analysis report of sepsis around the world. The result? One in five deaths around the world is caused by sepsis. Researchers at the University of Washington said these ‘alarming’ figures are twice the previous estimates.

It has been over two years now since the revolutionary accidental discovery of a protocol that works and is being used successfully in a Norfolk hospital in East Virginia USA. This protocol will make sepsis a disease that can be controlled and in the majority of cases, cured. This protocol should be available to everyone around the world. It is cheap, easy to administer and has no side effects. But, the main ingredient of this new treatment has been known about for decades.

The case for large dose vitamin C infusions has been lingering these past 40 plus years after two times nobel prize winner Linus Pauling first indicated it’s miraculous benefits for many diseases. He was ridiculed and vilified by allopathic medics and other closed minded medical professionals. It’s a shame that new innovations such as IVC are left by the wayside and ignored by bigotted medical professionals and slagged off by pharmaceutical industry propaganda.

How many lives would have been saved…

If this amazing natural treatment had been properly researched and recommended when first it was discovered, it would have saved millions of lives from death by septic shock and other distressing conditions like blindness. How long will it be I wonder, before this therapy becomes widespread and a recognised treatment for a plethora of deadly conditions. How many people will die and suffer needlessly before IVC administration is approved. If you were dying of sepsis, would you not want your physician to try it?

Even before Linus Pauling, there is a history of IV administered Vitamin C,  which started in 1943 when Frederick Klenner M.D. cured people suffering from polio, not to mention measles. But here we are nearly 80 years on and only now is intra-venous vitamin C (IVC) on the lips of many naturopaths and medical doctors alike. But still there is prevarication and scepticism. Are pharmaceutical companies behind this dragging of feet? Just follow the money! With this treatment, there are no profits to be had because it is natural and cheap. In fact, if this treatment was the gold standard, the pharmaceuticals would be in real trouble.

Why do you think the English are called ‘limeys’. It’s because their sailors, way back when facing Napoleon, won the day because they had citric fruits and juice to stave off the dreaded ‘scurvy’. Napoleon’s sailors were sick with scurvy and despite being superior in numbers, succumbed to an undermanned British navy. All because they had a supply of citrous fruits. 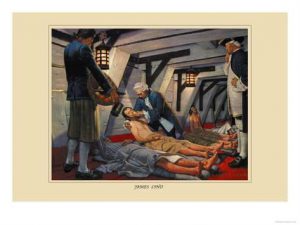 The first study was carried out by Scottish Royal Navy surgeon James Lind in 1747. He spent 8 weeks on HMS Salisbury where there was an outbreak of scurvy. Twelve sailors with the disease were put together in the same part of the ship. Lind gave them all the same diet but split them up into pairs.  Each pair had additional rations. For example one pair had to drink half a pint of seawater each day and another pair had a quart of cider. However two of the sailors were each given one lemon and two oranges to eat each day. After nearly a week, one of them recovered and returned to duty and the other was well enough to carry on nursing the remaining ten sailors.

In 1753 Lind wrote a ‘treatise’ about the experiment. This treatise was effectively ignored. It was not until 1795, after Lind had died, that his discovery was adopted. Even so, other countries were very slow to use this obvious cure for scurvy. In fact, scurvy remained a serious problem during the American Civil War. How slow-witted was that! 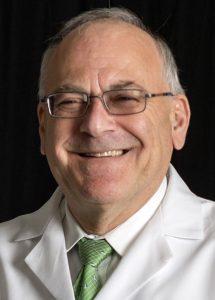 Coming back to the present time, there are doctors not frightened to try intravenous vitamin C (IVC), despite it not being recognised by the FDA. Dr Paul Marik received a paper from a Prof. Berry Fowler from Virginia Commonweath University. Dr Marik is a critical care specialist at the Sentara Norfolk General Hospital and is an EVMS (Eastern Virginia Medical School) doctor and researcher. He followed Prof. Fowler’s protocol which includes Intra Venous Vitamin C, Thiamine (B1) and Hydrocortisone. He explains below what happened with his first patient: Click on his image and see a video of his interview.

“We had a young woman who was dying from overwhelming sepsis,” Dr. Marik recalls. “She was critically ill and I knew absolutely that she was going to die. When you are faced with that situation, you ask yourself, is there anything else I can do?” He remembered the paper Prof. Fowler had sent him and treated the woman with similar doses as indicated in the research. The next day he came in and to his astonishment, the woman was recovering. She was out of the Intensive Care Unit (ICU) within a couple of days. Dr Marik has now treated many patients, the majority of whom have survived despite being on death’s door. 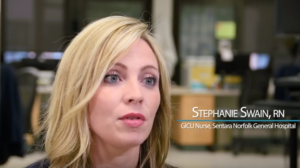 Even the nurses were skeptical about the new protocol Dr Marik prescribed at the Sentara Norfolk General Hospital. They thought it was just a fluke that patients, even with severe sepsis, were recovering rapidly. This little video with the nurses speaking of the amazing recoveries they witness whilst nursing sepsis patients, is quite uplifting! They are: Kathi Hudgins RN GICU Team Coordinator, Stephanie Swain RN GICU Nurse, Stacey Doxey RN GICU Nurse. 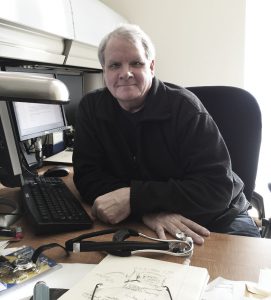 The originator of the paper is Professor Alpha (Berry) Fowler III, from the VCU Johnson Center for Critical Care and Pulmonary Research. He actually conducted a double blind study at his hospital.

How it worked was a patient came into the intensive care unit, dying from septic shock. The pharmacy was enrolled in the study and after a call to them from ICU, they would send bags of fluid to be administered to the patient. Neither the nurses or the pharmacy knew which of the bags were placebo and which were IVC.

A few week in…

After a few weeks into the study, the nurses started to get wise as to who had had the IVC. Some of the patients were making remarkable recoveries and the nurses came to Dr Fowler and told him that they knew who was receiving the IVC. The nurses explained “We know who’s getting the IVC because their blood pressure immediately comes up. They start waking up, they’re feeling better, they start eating right away.”

This ground-breaking research indicates that ascorbic acid (vitamin C) has the potential to be an effective therapeutic agent against sepsis. Prof. Fowler states that bacterial, viral, and fungal sepsis kills more than 350,000 Americans each year?  “Think of two fully loaded 747’s crashing every day. That will give you an understanding of the number of lives lost each year.” he says.

It looks as though these death figures from Prof. Fowler need to be updated, according to the 2020 report. 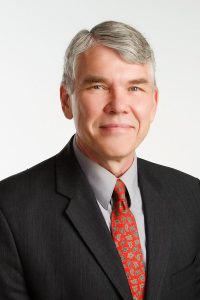 Similar doses given at the clinic

These are the equivalent doses that the Riordan clinic will give to a very sick cancer patient or someone with an infectious disease. Infusions are more convenient than taking vast amounts of tablets every hour.

Get the tissues out!

If you have time, take a look at this video explaining how vitamin C saved a man with terminal swine flu. Another example of how an infection is cured by a simple nutrient.

What is sepsis exactly?

According to the British NHS (National Health Service),

“Sepsis can be triggered by an infection in any part of the body. The most common sites of infection leading to sepsis are the lungs, urinary tract, tummy (abdomen) and pelvis.

Sepsis may develop when you’re already in hospital. For example, you’re more likely to develop sepsis if:

A crime against humanity

Vitamin C benefits have been known about for centuries but still IVC treatment is ignored by mainstream medicine. It would appear that these medicinal fraternities are as weak-minded today as they were in the American Civil War. There is no excuse for not trying a treatment that has saved others and is harmless, with no side effects. If a patient is dying anyway, what’s the problem? What is there to lose? It is a crime against humanity.

If you get sepsis

If you are unfortunate enough to contract sepsis, ask for IVC treatment. If you are a relative of someone with sepsis, suggest IVC. It is your right to insist on this life saving therapy. You could recommend they consult Dr Paul Marik’s and/or Professor (Berry) Fowler’s work. You could even forward them this article.

There are many natural treatments that are vilified, ridiculed and called quackery, just because they are naturopathic, not allopathic. This stupidity and greed is costing the lives of millions. Despite the overwhelming evidence that IVC can treat and cure various complaints including sepsis, many will die needlessly, probably in the name of profits, or the lack thereof.

Doctors of the future, stand up and take action

Hopefully, more doctors will buck the trend and start using IVC and other natural treatments that have been found to save lives or improve quality of life. Patients deserve to be given the best treatment with the least side effects. Natural treatments invariably do just that.

Article Name
Can Sepsis Be Cured?
Description
Can sepsis be cured? There are doctors not frightened to try intravenous vitamin C (IVC), despite it not being recognised by the FDA.
Author
Ches Power
Publisher Name
https://magnesiumandhealth.com
Publisher Logo