Many people ask ‘why do I have chest pain?  There are numerous reasons why you may have pain in the chest area and it doesn’t always mean you have something wrong with your heart.

There are many incidences where people think that they may be having a heart attack and I will be going through two of them further in this post.  But first, I want to emphasise that if you are having any of the following symptoms, consult a doctor and/or call for an ambulance immediately:

Symptoms vary from one person to another and often differ between men and women.

You’re not being a nuisance!

People are often worried about calling an ambulance or even their doctor, especially the elderly, who think they’re being a nuisance.  Don’t delay, the medical profession do not mind false alarms.  They prefer you to do something immediately if you are feeling unwell.  It is their job to look after you, no matter if it’s indigestion or something more serious.

It is imperative that you look after your cardiovascular system by keeping your Mg levels up and not taking Calcium supplements unless you are lactose intolerant or do not eat dairy products.  This post will explain why.

Not all chest pain is heart related

There are a couple of little known conditions which many people may think is the start of a heart attack and I want to explain what these are in this post. 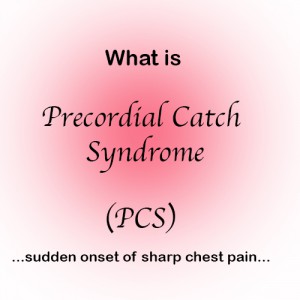 The phenomenom known as ‘precordial catch syndrome’ is also known as ‘Texidor’s twinge’.  It is a quite common cause of chest pain especially in children and young adults.  It does occur in adults but it is less frequent.  This can be quite a frightening experience because the first thing that people think of with chest pain is ‘am I having a heart attack’.

PCS manifests itself as being a very sharp and intense pain mostly felt on the left side of the chest.  It appears to generate from the cartilage between the sternum and rib cage and the pain seems to increase when taking a breath.  The normal reaction is to take a deep breath and this evidently makes the pain worse.

The symptoms are described as being like a bubble popping or a cracking sensation after which the pain can subside.  The problem is, many sufferers think they are experiencing a heart attack which causes them to panic. 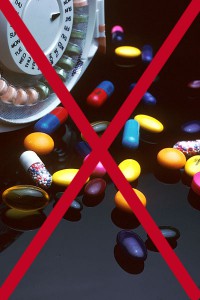 The pain only usually lasts for a minute or two and sometimes just a few seconds.  Occasionally it can last for a lot longer and persist for half an hour or so.   Some patients suffer this phenomenon on a daily basis and some less frequently with months or even years between episodes.  In the majority of cases the pain diminishes completely and no medication is necessary.  There is no known treatment or cure for this condition but knowing that it is harmless is comforting.(1)

Although close to the heart, the condition is not thought to be of cardiac origin and it is not dangerous or life threatening.   It is thought though, to be related to stressful situations and anxiety, despite many sufferers being in a relaxed state or lying down when the attack happens.

One theory is that the condition may be because of cramping in the chest from the compression of a nerve with a subsequent muscle spasm in the intercostal region.   Muscle spasms can be alleviated with magnesium supplementation as it is a wonderful muscle relaxant.

“The Devil’s Grip” is a rather antequated but entirely legitimate medical term for a quite rare condition that can cause excruciatingly intense chest pain.  It seems to intensify when breathing in deeply and with movement and the area is often sore to the touch.

Officially known as ‘Bornholm disease’ but often called Bamble disease and sometimes Sylvest’s disease.  Bamble is a town in Telemark county, Norway where the disease was first recorded in 1872 by a chap called Daae.  Sixty years later, there was a case recorded on Bornholm, an island belonging to Denmark. A Danish doctor called Sylvest then named the condition after the island in 1930.  Others know it as epidemic pleurodynia, epidemic myalgia or epidemic benign dry pleurisy.

Symptoms are various but the main problem is a severe sharp pain in the chest. There is often a cough and a slight fever with the condition.  The pain generally seems to be towards the right side of the heart but sometimes can radiate up the left side of the chest to the shoulder.  The slightest movement of the ribcage or breathing in, seems to increase the pain.  It is often felt in the tummy area, muscles and there can be a sore throat and headache along with the fever.  This pain comes and goes in episodes lasting 15 – 30 minutes.  The onset is usually sudden and can persist for a few days before subsiding.  It is possible that the condition can reoccur, but its not generally the case.

This seems to be associated with a virus called Coxsackie B virus.  It attacks the muscles between the ribs, killing cells and causing inflammation.  (If muscles are involved then Mg supplementation will help.)  This virus can easily spread from one person to another.  The virus lives in the intestines and is contracted by other victims because of poor handwashing or contamination.  It can be spread easily through coughing and sneezing so whilst infected, kissing is a no no as well as sharing utensils, drinking from the same cup/glass.  It’s good practice to make sure that the sufferer has his/her own mug/cup/glass etc., for the time they are infected, which shouldn’t be too long. 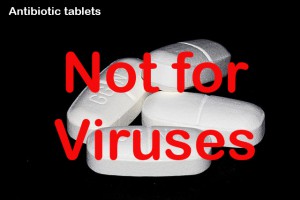 As for pain relief, ibupropen and other anti inflammatories are usually prescribed.  As I mentioned earlier, Mg supplements will always help muscle spasms and muscles are involved in the pain of this condition.  Remember, this is a virus, antibiotics will not help, they are for bacterial infections.

How long will it last?

The condition generally lasts for under a week and sometimes as little as 2 days.  The majority of cases seem to affect those under 30 years.  Most people, if they have a good immune system, will not get the full force of this condition but will feel like they have mild flulike symptoms.  Outbreaks can occur within communities such as schools or nurseries, and more often during the summer and autumn.  Outbreaks have occured in laboratories dealing with the Coxsackie B virus.

The problem with Bornholm disease is it’s quite rare and therefore can be misdiagnosed or not diagnosed at all!  It can be disconcerting for the patient when his doctor doesn’t know what he has, often after going through numerous tests.  The upside of it is that usually ECGs and other heart health tests are nearly always normal and this can be a relief to the sufferer.  At least he/she knows it’s not a heart attack!

Please comment if you have any useful information which could be of help to other sufferers.  I look forward to hearing from you.
Ches Power

Article Name
Why Do I Have Chest Pain?
Description
Many people ask 'why do I have chest pain? There are numerous reasons why you may have pain in the chest area and it doesn't always mean you have something wrong with your heart.
Author
Ches Power
Publisher Name
magnesiumandhealth.com
Publisher Logo